Tired and hungry were the words Irene Perez Ploke Sgambelluri used to describe how she felt every day during the war. She was only 10 years old at the onset of the war and, instantly, her life was forever changed.

In 1941, Irene’s family lived in Agat. Her father, John. F. Ploke, and her mother Beatrice Duenas Taitano Perez Ploke had four children including Irene. Danny was 12 years old, Pauline was nine, and Irene’s baby sister Genevieve was only eight months old. Mr. Ploke was a pharmacist mate first class in the U.S. Navy and was assigned to Agat to tend to people in need of medical treatment.

On Dec. 8, 1941, Irene and her family were having breakfast when they heard the sound of planes flying over the island, and saw black objects dropping from them. Minutes later, her grandfather, Atanacio Taitano Perez, called to tell them that the United States and Japan were at war.

Unlike many Chamorro families who did not expect the Japanese invasion, Irene’s family was aware of it before it occurred. The United States military had warned her family to leave the island, but her mother had refused. She had wanted to remain with Irene’s grandparents, because they were old. In the midst of the bombing, Irene’s grandfather sent his driver to help transport her family to Hagåtña, where he lived, so that they could all be together. Irene’s family traveled light, only carrying some clothing and documents.

Once they arrived in Hagåtña, they realized that they could not stay there, and found shelter at a ranch in Adacao belonging to her grandmother’s brother, Gregorio Duenas. They did not have the opportunity to rest overnight because they had to move quickly to Adacao. They stayed at the ranch for about three days, where they and the Duenas family slept on guafak floor mats, and they ate chickens, rice, and eggs for their meals.

During this time, Irene’s father had to hide in the jungle from the Japanese. Because he was an American in the Navy, he was wanted by the Japanese. Eventually a Japanese interpreter and two Japanese soldiers came looking for him at the ranch. They told Irene’s mother that he had to surrender or their family would be killed, and so her mother sent Irene to search for him. Once she found her father, she shared the news with him. He removed his shirt, tied it to a stick, and surrendered while holding Irene’s hand. “I will never forget that day,” she said. “I did not know this then, but my father’s fate was that of a prisoner of war.”

Irene’s father was taken to Hagåtña and imprisoned in a building next to the Cathedral Basilica with other men. Days later while taking coffee to her father, Irene and her family discovered that all the men, including her father, were transferred to Zentsuji Prisoner of War camp in Osaka, Japan. “We never had a chance to say goodbye,” she said. “And we feared we would never see him again.” 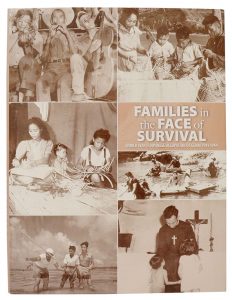 To continue reading Irene Sgambelluri’s story and others, you may purchase Families in the Face of Survival online at phpstore.org or by calling (888) 485-1941. This excerpt was reprinted with permission by the Guam War Survivors Memorial Foundation.