Honoring the Past, Inspiring the Future — the poignant theme of the 75th anniversary of the attack on Pearl Harbor resonated so true this past December when more than 10,000 people made the long journey to Hawaii to join us in commemorating the anniversary. Most notable were the 200 or so Pearl Harbor Survivors and World War II veterans from all corners of our great nation who boarded honor flights and came in numbers we had not anticipated. We joined together to honor and pay tribute to the legacy of the Greatest Generation, to recognize and pay our respects to those heroes whose unwavering sacrifice, patriotism, courage and selflessness set the foundation for the freedoms we live under today. This marquee 75th commemorative year of remembrance will be hallmarked as the last reunion of so many of our survivors and veterans. 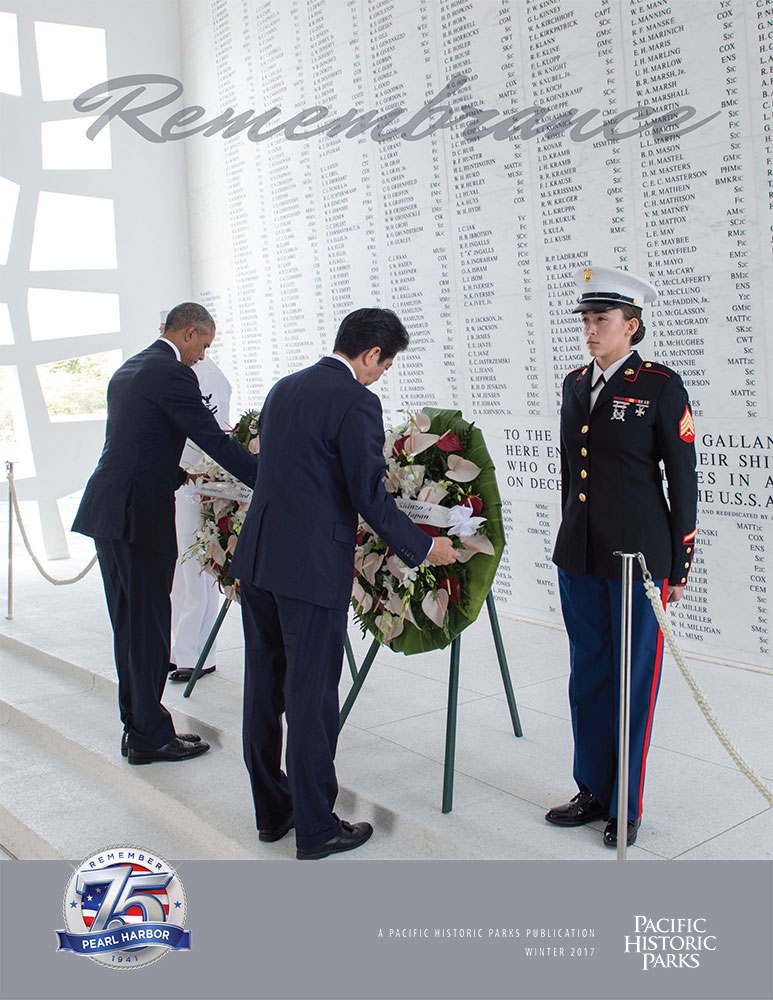 In this edition of Remembrance, we feature images from some of the signature events that took place during the commemorative week, including memorial services at the USS Arizona Memorial, USS Oklahoma Memorial, and USS Utah Memorial, the Fighting Two Wars luncheon, the launch of the new virtual reality experience at the Pearl Harbor Visitor Center, and the solemn double interment of USS Arizona Survivors John D. Anderson and Clarendon R. Hetrick. On Dec. 27, President Barack Obama and Prime Minister Shinzo Abe met with three of our treasured survivors: Sterling Cale, Al Rodrigues and Everett Hyland. It was a poignant and globally impactful meeting; a meeting that visually alone demonstrated how far we have come and how former adversaries are now the closest of allies.

Our own Uncle Herb Weatherwax attended as many of the events as possible. I was able to speak with him on the evening of Dec. 4. He was 99 years young and had looked forward to this year’s commemoration. A survivor and long-time volunteer at the Pearl Harbor Visitor Center, he joined his brothers who had passed on before him a few days after the ceremonies ended. His story, the values he instilled in his children and the service he gave to his country were proudly shared over the many years that he greeted, posed for photos and autographed his book for visitors young and old. His family will be celebrating his life this coming June (on what would have been his 100th birthday), and we are honored to share his story with you.

During this 75th anniversary year, it is our hope that this edition of Remembrance conveys just how important it is to memorialize not only the commemoration … but how we will convert these experiences into a narrative for future generations to learn what took place here 75 years ago … and why it is important to commemorate that day that will live in infamy.