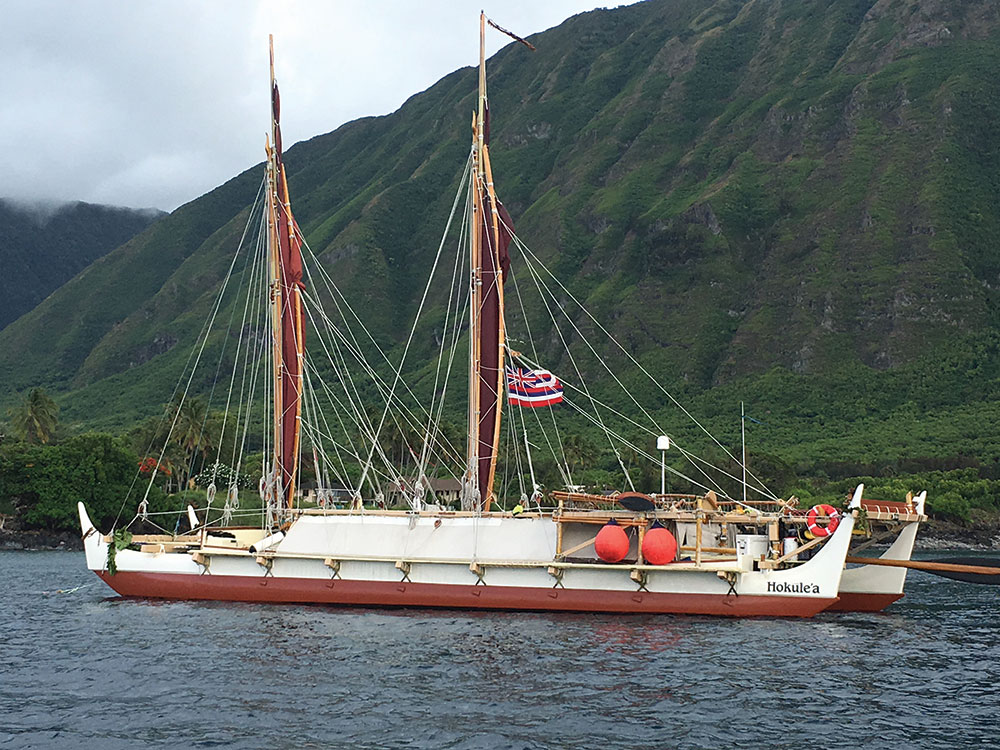 Kalaupapa was the last official port of call on Mālama Honua, a three-year worldwide voyage that culminated with a huge celebratory welcome on Oahu. It was a magical moment when, 41 years after her historic maiden voyage to Tahiti, the Hōkūle`a accompanied by the Hikianalia and the Tahitian canoe Fa`afaite sailed around the point into Awahua Bay at Kalaupapa. The next day they were joined by Maui canoe, Mo`okiha, and the newly completed Okeanos that was birthed in Aotearoa (New Zealand) just five days before the long return began. The Okeanos will be presented as a gift to the people of Micronesia after the big celebration and festivities on Oahu.

The wa`a (canoes) were greeted at the historic Kalaupapa landing with the sound of the pu (conch), traditional chants, protocol exchanges and speeches. Kalaupapa residents and friends had spent several days making lei to present to each of the 80-plus crew members and each wa`a including a thick 40-foot lei kukui for Hōkūle`a.

When the Tahitian crew learned they would be stopping at Kalaupapa, they made a special trip to Orofara Valley, the home of a former Hansen’s disease settlement. There they selected a gift for the Kalaupapa patient community – a pohaku (rock) that they named Mafatu which means “heart” in Tahitian. It was a very fitting gift given the similar histories of Orofara and Kalaupapa.

Most of the crew slept on the wa`a at night and came on land during the day to help with service projects and engage with the community. Damien Tours owner, Gloria Marks, provided a free historical tour for the crew members so they could learn about Kalaupapa’s unique history. “It’s for all the community. I really appreciated them being here,” she said. Over the course of their four-day visit, there was much sharing of food, music, stories and laughter. The patient residents shared their stories of meeting master navigator Mau Piailug on that historic 1976 visit.

The four-day visit culminated with a dinner for the 80-plus crew members hosted by the Kalaupapa community. The closing ceremonies ended the following day with a powerful and moving `awa ceremony before the five wa`a sailed away into the horizon.

Representing at least 35 nationalities around the world, over 8,000 people were banished to Kalaupapa. It is remarkable that almost every Hawaiian genealogical line connects to someone sent there. The canoes coming to Kalaupapa to end the voyage was like a review of where she had been and all the people and places Hōkūle`a connected with and touched.

In the welcome home theme of Lei Ka`apuni Honua – the lei that encircles the world – Kalaupapa was the last flower strung into this magnificent lei. Hōkūle`a traveled thousands of miles and weathered many storms and precarious situations. She was beat and tired from the long sail up from Tahiti. Coming to rest at Kalaupapa was like having a quiet respite at tutu’s (grandparent’s) house. Finally, Hōkūle`a could exhale and stretch just for a bit before engaging with the crowds of people she had to thank for helping her accomplish this major feat of circumnavigating the globe. Hōkūle`a will be spending the next eight months visiting each community in Hawaii so that everyone, especially the children, will have a chance to learn and spend time with her.