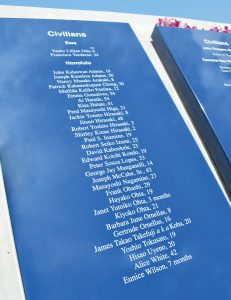 In the historical narrative of Dec. 7, 1941, a lesser known story is the 49 civilians who lost their lives. Kisa Hatate was one of those civilian casualties, and she is included in the list of names engraved upon the blue commemorative plaques at Remembrance Circle at World War II Valor in the Pacific National Monument.

Kisa Kagihara was born on Maui at the turn of the century. She was the oldest daughter of Japanese immigrants Unosuke Kagihara and Rie Kawakami, who had arrived in Hawaii in 1898.1

According to the 1920 census, Kisa, her younger brother Toraichi and her father were all employed at the pineapple cannery in Haiku Village on Maui. Kisa and her father were laborers, while her brother worked as a timekeeper. Rie stayed at home with the seven youngest children, four boys and three girls.2 Among the girls was Ruth, who was Kisa’s daughter but was being raised as one of her sisters.

By 1930, Kisa had moved to Honolulu and had married Tsuruaki Hatate, a grocery store manager originally from Japan. They lived on North School Street.3 The couple had three children: Raymond (born 1931), Richard (born 1933) and Elinor (born 1935). A couple of years prior to the war, Tsuruaki died from tuberculosis.

By the time of the 1940 census, Kisa had moved to 946 McCully St., close to the intersection of McCully and King streets. She was in her late 30s with an eighth grade education, a single mother working 48 hours a week as a servant for private families. Her annual income was $572, and her monthly rent was $11. Kisa’s eldest daughter, 20-year-old Ruth Horimoto, lived a few blocks away on Date Street with her husband and son.4

The story of what happened to Kisa Hatate on Dec. 7, 1941 is passed on through oral stories recounted by family members, down through the generations.

“At the time of the bombing, grandma [Ruth] said that Kisa was upstairs doing laundry, and Auntie Elinor was in the house with her, but she knew the boys were on the street playing,” says one great granddaughter, who heard these stories from Ruth. “So she grabbed — I guess when she heard the bombing was going on — she grabbed Auntie Elinor, and they ran on the street to go look for the boys.”

“I heard she [Kisa] was outside when the attack happened,” says another granddaughter. “I think she was hanging laundry or something. Elinor was upstairs, so when the boom came, Elinor ran to the window — this is from Elinor — she looked outside and everyone was running across the street, so she ran downstairs, the inside stairs, and ran across the street. But Kisa was outside, so she ran upstairs to the outdoor steps, so they didn’t get to see each other.”

A projectile started the first fire at a drugstore at McCully and King. The fire then spread by tradewinds to adjacent buildings until nearly the whole city block was on fire.5 The fire burned for hours, causing $158,000 (or $2.5 million today) worth of damage to stores and dwellings occupied by 31 families at 1919-1923 S. King St. and 940-946 McCully St.6 Most civilian casualties in Honolulu were the result of flying shrapnel from American antiaircraft projectiles, fragments of pavement or other objects thrown by explosions or from concussion.7

It was while Kisa was out on the street that she was hit by a piece of shrapnel. Ruth and Paul Horimoto drove her to nearby Lunalilo School, which served as a first aid center during the attack. At Lunalilo School was a young Red Cross volunteer named Daniel Inouye, who would later go on to enlist in the Army, earn the Medal of Honor and serve as a U.S. senator. Thirty minutes after the McCully fire was reported, the Lunalilo School roof burst into flames, and first aid personnel were forced to treat 18 casualties under coconut trees.8 Kisa did not die right away; she was still conscious and talking when she was taken in. A doctor removed a piece of the shrapnel and asked the family if they wanted to keep it. The Horimotos said no. The shrapnel was placed in a bottle and lined up next to other bottles containing similar evidence collected from other patients. Kisa died later that day due to blood loss.

On July 15, 2016, nearly two dozen members of the Hatate family were given a boat tour around Ford Island, visiting the USS Arizona Memorial and later stopping by the Pearl Harbor Visitor Center to view the list of Pearl Harbor civilian casualties recorded at Remembrance Circle. For many of the family members, this was their first time seeing the blue plaques. At Remembrance Circle, her name and age when she died are engraved: “Kisa Hatate, 41.”